Recollections from holidays past

Thanksgiving is family, food, and thankfulness. It’s when you have this homing urge to join your people over a huge roasted turkey. When you were ten you punched your cousin in the nose for some remark he made. When you were eighteen, you were bored and wishing to be somewhere else, but mom made you stay. When you were twenty-eight, you were setting up the children’s table. And so it goes right down to Grandpa who at 90 announced he didn’t need to watch his cholesterol any more and reached for the butter dish. (I loved it when he did that.) 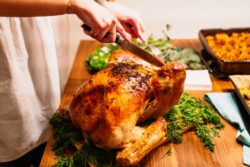 Our turkey is carved in the kitchen, makes it easier for serving. But when the grandchildren were young, they always expected that rooster to make an appearance at Thanksgiving. It’s a tradition as such. They are grown-ups…